Afterparty is a Hell-based narrative adventure by Night School Studio, known for the acclaimed mystery adventure game, Oxenfree. You play as Lola and Milo, two recently deceased friends who find themselves in Hell—mistakenly, or so they think. Soon after arrival, they learn of a loophole: outdrink Satan, and he’ll let you return to Earth. 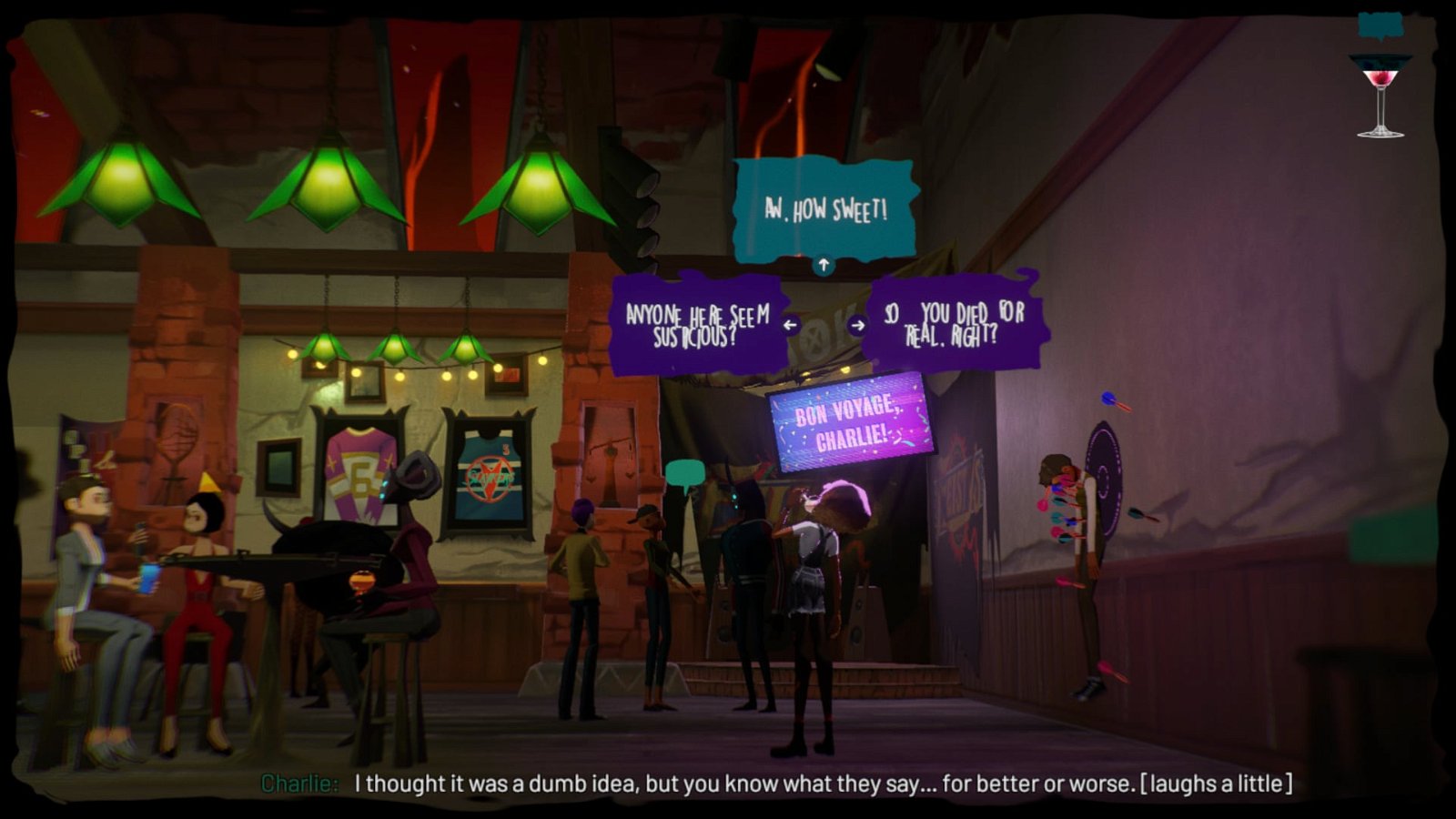 If you distill it down, the point of this game is bar-hopping: drift from bar to bar, order new drinks, and chat with different people as you take on the various puzzles and situations in the game.

This variant of Hell isn’t all that bad of a place. It’s a darker and slightly more tortuous facsimile of Earth. It eschews what could have been a grim horror setting, and instead brings a casual levity to Hell. Satan really could be your friend—and not in a “satanist” way; “hail satan” is used sarcastically in this game.

That said, you’re here after hours where everyone—humans and demons—are off the clock. The allusions to Hell while on the clock sound much, much worse. 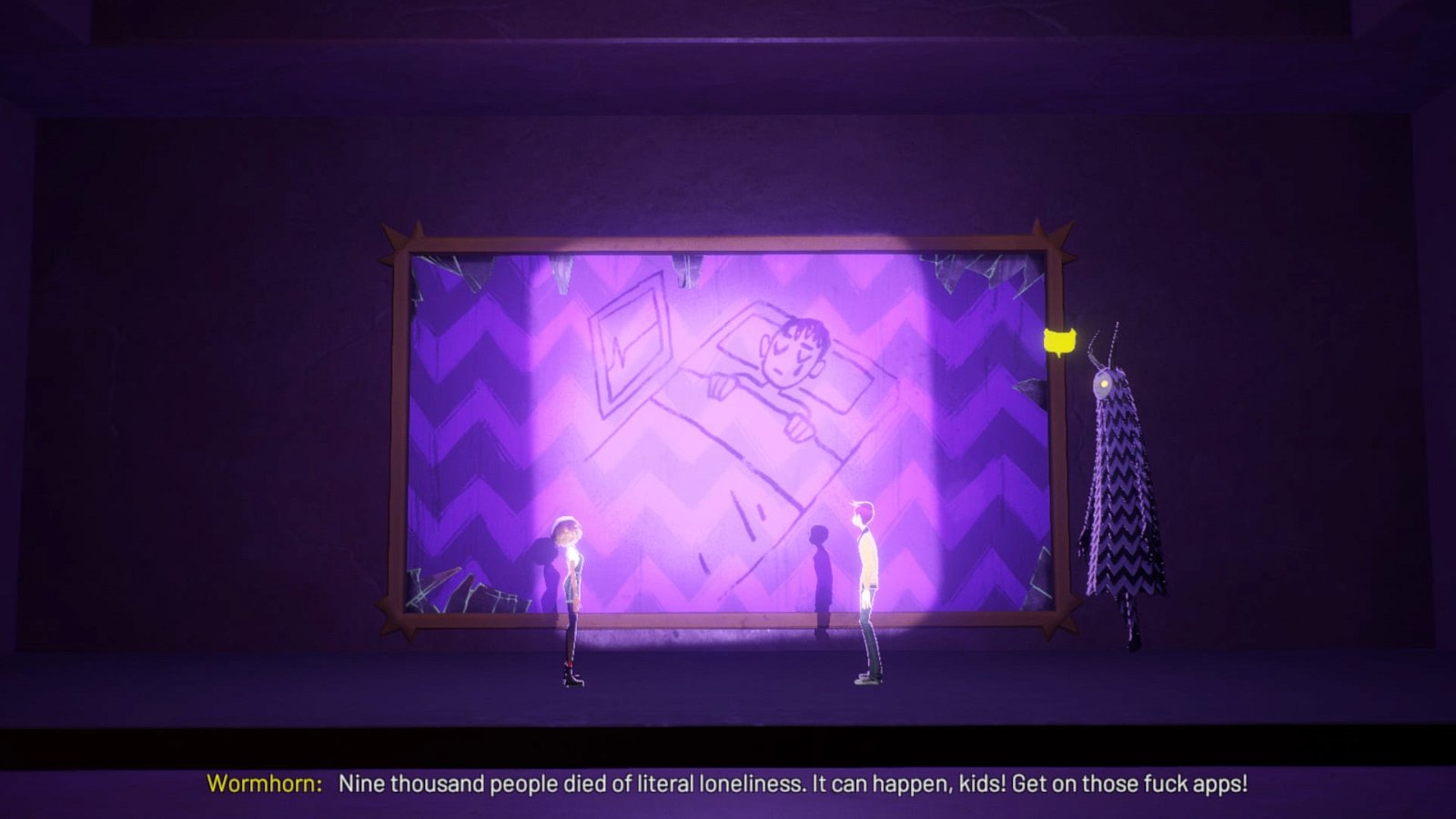 Your Own, Personal Demon

There’s a wide variety of characters that you encounter in your romp through Hell. You’re assigned a personal demon, Wormhorn, who is responsible for a lot of non sequitur interruptions in your story—she drops in at inopportune moments to offend you. There’s also a demon nicknamed Fela—short for, uh, Fellatio—that requisitions you to help investigate some odd happenings at one of the bars.

One of the highlights is Sam, voiced by the inimitable Ashly Burch, who is your taxi driver throughout the lava rivers of Hell, ping-ponging you from place to place. She’s your friend, and also there for a lot of the exposition, giving you tips and background information for each new situation you’re soon to land yourself in.

Naturally, Satan is the center of the party. Hell is his domain, after all, and you find yourself at his home several times throughout the game. It turns out the big guy isn’t having that good of a time—he’s a bit of nice guy, but can’t keep his right friends and family around him. So maybe you’re not showing up at the best of times, but you’re not going to back down from the opportunity to make your way back to Earth. 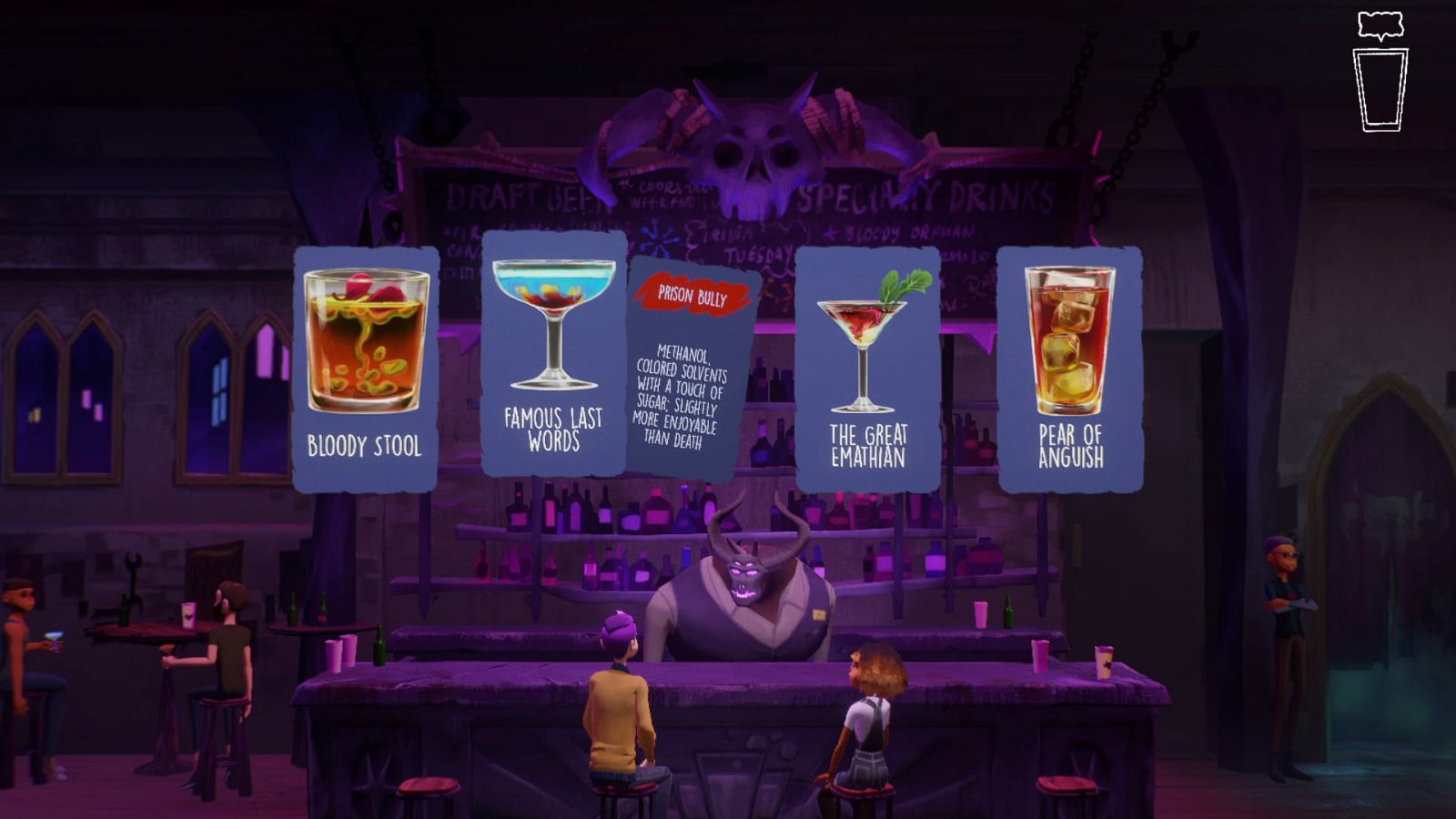 The drinks—Hellcohol, harder stuff than on Earth—are pretty smart, and add a delightful punch of flavor to the game. Each different drink mixes up the game by unlocking new dialogue options tailored to the drink you’ve had.

You take a sip of your drink to unlock the new dialogue associated with your drink. If you don’t take a sip, you limited to default options, or you can say nothing at all. Not every choice is wise, though; mentioning romance to Asmodeus—a club-hitting monarch going through a rough breakup—might earn you some ire.

Even though there are some generic drinks like Bloody Stool give you a punch of confidence, some of the drinks shake up the dialogue. The drink The Grand Exhibitionist makes you talk like a vaudeville villain. Bluebeard’s Last Wife makes ye talk like a pirate—shiver me timbers! Oh, yeah, there’s even a drink that’s advertised as acid. I’ll leave you to ponder that one. 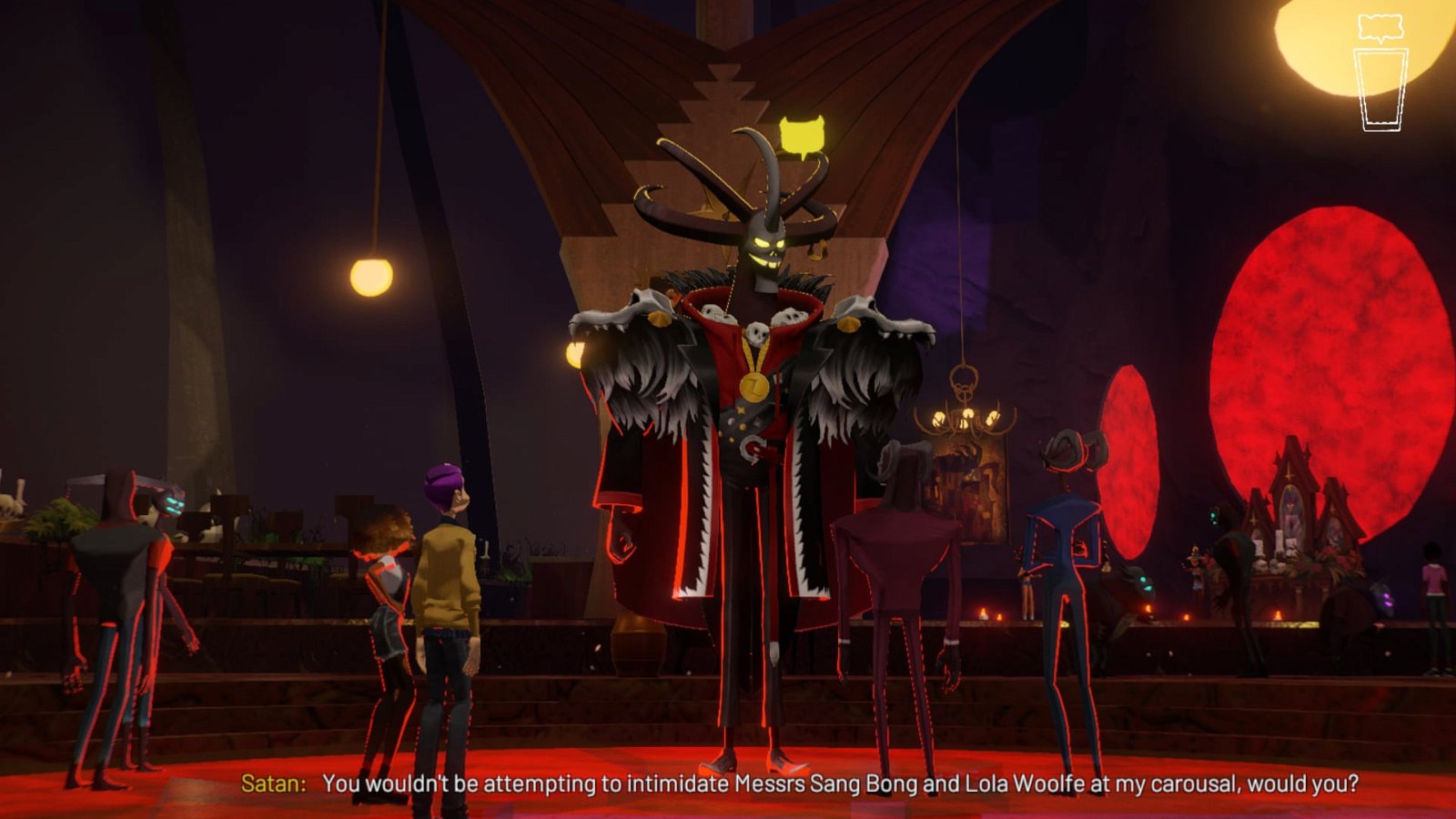 Afterparty falls in my sweet spot of narrative games where you feel like you’re in control of the story. Night School committed to an actual branching narrative here; your choices take you down substantially different paths where you meet different characters and have different dialogue, even though you’re still going to wind up a drinking game with Satan at the end. There’s enough content for multiple playthroughs here.

Also, for such a long game, the writing sure holds up. You don't get bored of the comedy. Milo and Lola are realistic, flawed characters that you can certainly relate to in some way or another. It’s a testament to the writing that the dialogue stays consistently funny and doesn’t get dreary or fall apart during the game.

Afterparty is your perfect Halloween weekend game, and it’s available on PS4, Xbox One, and the Epic Games store for Mac and PC.

Sealed Bite is a forest platformer game by securas and wondard, which took first place in the 2019 GitHub Game Off. You play as a little red riding hood character who is venturing around the forest. During some light platforming, you're suddenly attacked and bitten by a werewolf, and black out. What sort of trouble can you get into in the forest? Recovering from the wolf bite, you meet a spirit who tells you what’s happened and gives you the...

Flux Caves is a puzzle game by Fubenalvo, inspired by The Witness and shrines in The Legend of Zelda: Breath of the Wild. Flux Caves is about solving puzzles, to push pipe blocks around to connect them to allow balls to flow from the start to the end of the puzzle unimpeded. In Flux Caves, you’re solving puzzles in two distinct environments. Some puzzles take place in caves, placing you in a “classic” puzzle chamber environment. Outdoor envir...

Picking Up the Pieces

Picking up the Pieces, by Cole Chittim, is an experimental narrative game about mental health. It’s sort of a low poly walking sim, where you experience a cross-section of the life of the narrator, picking up the pieces of their life. The game grapples with feelings related to external pressures, like unsupportive friends or reading news stories about people relatively more successful than you are. Or feeling like you’re stuck in a messy room...