John Wick Hex is an action strategy game developed by Bithell Games. Billed as a prequel to the John Wick film series, it's a timeline-based action game that puts you deep inside the tactical mind of John Wick.

Who is the Baba Yaga?

So, John Wick is the "Baba Yaga," a title loosely inspired by a Slavic term for an old chaotic witch. But here, it more or less means that "even the Boogeyman would be scared of him." And boy, there sure are Boogeymen here. Hex, an antagonist, developed for the game, kidnaps Winston and Charon. Each new map area is a "scene" set up for you to face a powerful enemy from John Wick's past, before the first movie.

This game is heavily stylized in a vibrant and flashy cyberpunk style. The UI is bright, and enemies die in sprays of neon pink blood.

True to the name, Hexes are everything in John Wick Hex. You move about the on a hexagonal grid. Because the levels are designed on a hex grid, but our everyday world on hexes, you don't exactly flow through spaces cleanly. When you first encounter John Wick ping-ponging and serpentining through a hallway, initially it's jarring but later becomes a bit endearing.

Even the final battle against Hex, a mob boss who prefers to stay out of sight, takes place in a Hex shaped room. 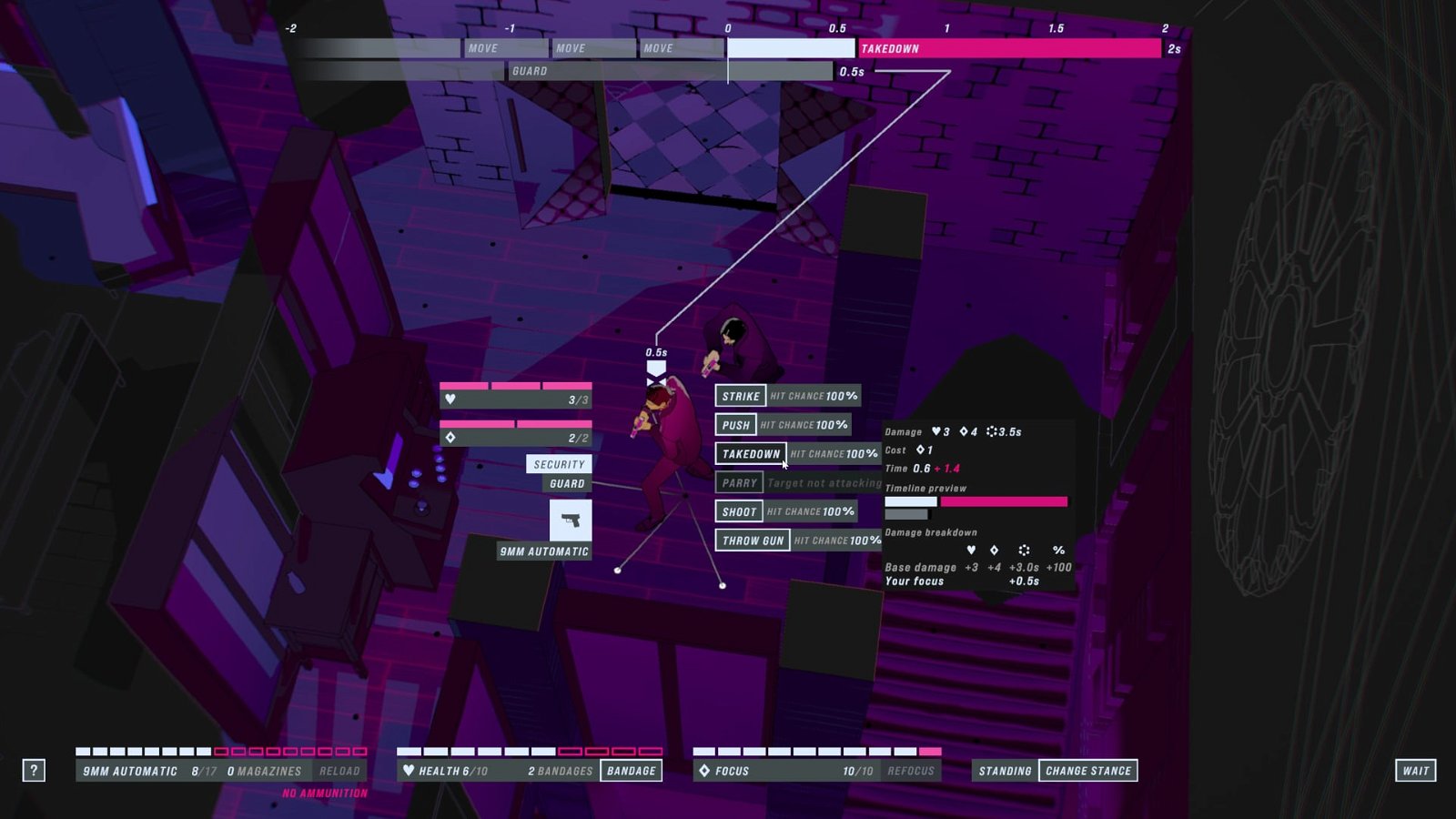 This game is essentially chess, but with guns and melee attacks instead of knights and rooks. You're always thinking about your decisions, and how it'll affect your timing for other incoming attacks from enemies. Mechanically, it's a bit of a cross-breed of the precise action dynamics of Superhot coupled with the tactical calculations of XCOM.

Playing as John Wick, you've got a limited set of actions—like "shoot" and "push"—that dictate how you interact with the world around you. You're free to move about, but every action—including movement—takes time. The timeline auto pauses when your queued action completes, or when there's a new interruption.

When you're scrapping it out against enemies, some actions are faster than others. A takedown is usually pretty useful, but it's a bit slow and needs melee proximity. A push against one enemy might get you out of the range of gunfire from a 2nd attacker. Parrying is an effective rapid response to a close enemy that's attacking, which generally enables you to edge in before their attack fires. You know the drill. On deck is the need to anticipate the moves of the people in the world—and sometimes it's better to wait.

It's a bit janky

Some parts of the game feel a bit off, though. In particular, the replay mode—which is available after you complete a level—stands out as having the most significant room for polish. Animations feel stilted and stuttery; there doesn't seem to be blended movements at play here. The dynamic camera also picks shots that are relatively uncinematic, occluding John or the enemy you're attacking from view, like behind an object or wall. It doesn't feel like a perfectly orchestrated cinematic action experience like the movies portray, but if you can look past that it's still an effective reflection of how you conquered a level.

Also at times, John Wick Hex has some tight difficulty pinch points which can make it a bit of a brutal game, much like XCOM, so you should get used to dying. I got extremely stuck in the Osborn level of Elysium and was frustrated because I felt like I was close but not quite to getting Osborne. I'd just get overwhelmed by a mire of enemies, even if I swept the place before entering Osborn's room. Part of me wants a lower difficulty I could flip on for that level, so I could advance forward and then flip it back to normal. It was worth it to stick with it, though—the level after Osborn introduced new enemies and weapons in the world that refreshed the tactical feel of the game after that tired boss fight.

Give it a shot

This game is a total departure from some of Bithell's past narrative-heavy games I've played, like Thomas Was Alone and Subsurface Circular. Even though it takes place in a story filled universe, the narrative takes the side seat to the tactics here.

If you're a John Wick series die-hard looking for the next dose of John Wick canon, there's no excuse to not pick up this game. The game is tightly associated with Lionsgate, featuring voice acting from the actual actors of Winston (Ian McShane) and Charon (Lance Reddick). If you're just looking for a good indie tactics game, but the cost ($19.99 at the time of publishing) is too much to chew, wait and give this game a shot when it's on sale.

John Wick Hex is available on the Epic Games store for Windows and macOS. The game's publisher provided a review copy of this game.

Eliza is a visual novel by Zachtronics, the developer of puzzle games Opus Magnum, Exapunks, and other Zachlike games. The visual novel explores the potential impact, ethics, and effectiveness of an AI-driven digital therapy program, Eliza. You take control of Evelyn, a newly hired proxy for the Eliza program. AI doesn’t make the world go round Eliza sessions are delivered by Proxies, contract workers who serve as a therapeutic human intermed...

Sayonara Wild Hearts is a pop album video game developed by Simogo, known for their previous titles Year Walk and Device 6. Featuring a half synth-pop, half EDM soundtrack from Daniel Olsen and Jonathan Eng, Sayonara Wild Hearts is like no rhythm game you’ve ever played. It’s probably fairer to say that this is a playable animated music video. Let’s Pop The musical immersion of this game is outstanding. Each track is a different level of the...