Tinderlike games primarily feature repetitive player-initiated approval/rejection as a core mechanic. Usage of this mechanic could be a few binary decisions: yes/no, true/false, approve/reject, or a swipe right/left. It can be a graded task, with a known "correct" answer, or merely an opportunity for the player to add their own opinion to the game. Either way, the player makes decisions that help them either progress onward or dynamically change the outcome of their game—something where the player feels like they have autonomy in the situation.

You know the saying: “Nothing is more certain than Death and Taxes,” right? Well, in Death and Taxes, you play as the Grim Reaper, assigned the job as the arbiter of death for humans in peril. It’s up to you to choose if they live or die. 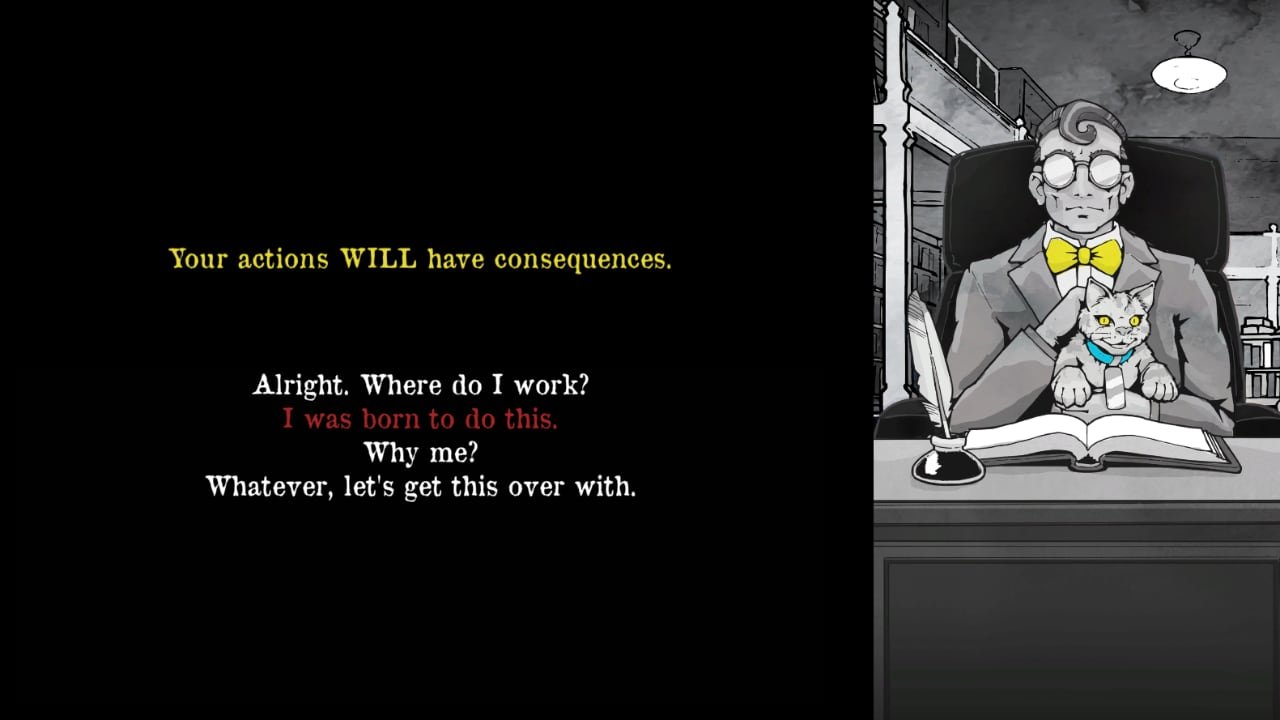 It's a boring office job, with perilous consequences

Fate, your boss and keeper of world order, assigns you a new batch of humans each day from your assigned region of Cosmopolis City in Sun County. Your instructions might be to mark one or two people with the Marker of Death, or—more sinisterly—to mark anyone with an engineering or medical background. You could mark Charlie Gocq, the CEO who practices insider trading, or David Garver, an IT architect that builds digital assistants. Or you could ruin the life of a sweet grandma who collects porcelain.

You keep track of the news on your phone—using Cawker—that shows tweet-like news reports, like threats of fire in Sun County, or an announcement that a social media star has fallen off a cliff will taking a selfie. Following Cawker helps you keep in touch with the world, and measure the impact of your actions: take out too many people in the medical field, and you’ll see tweets (cawks?) about an epidemic.

Yeah, it’s another tinderlike game—you’re given a stack of humans in peril and mark those for death based on your instructions. Like in Animal Inspector—you don’t get free rein over your choices. Instead, you do have to report to your supervisor who assigns you different work. There’s still something so compelling about the presence of choice in these games, even if the gameplay isn’t super shaken up from it. You can still disobey, and it has a bit of an impact on the world. 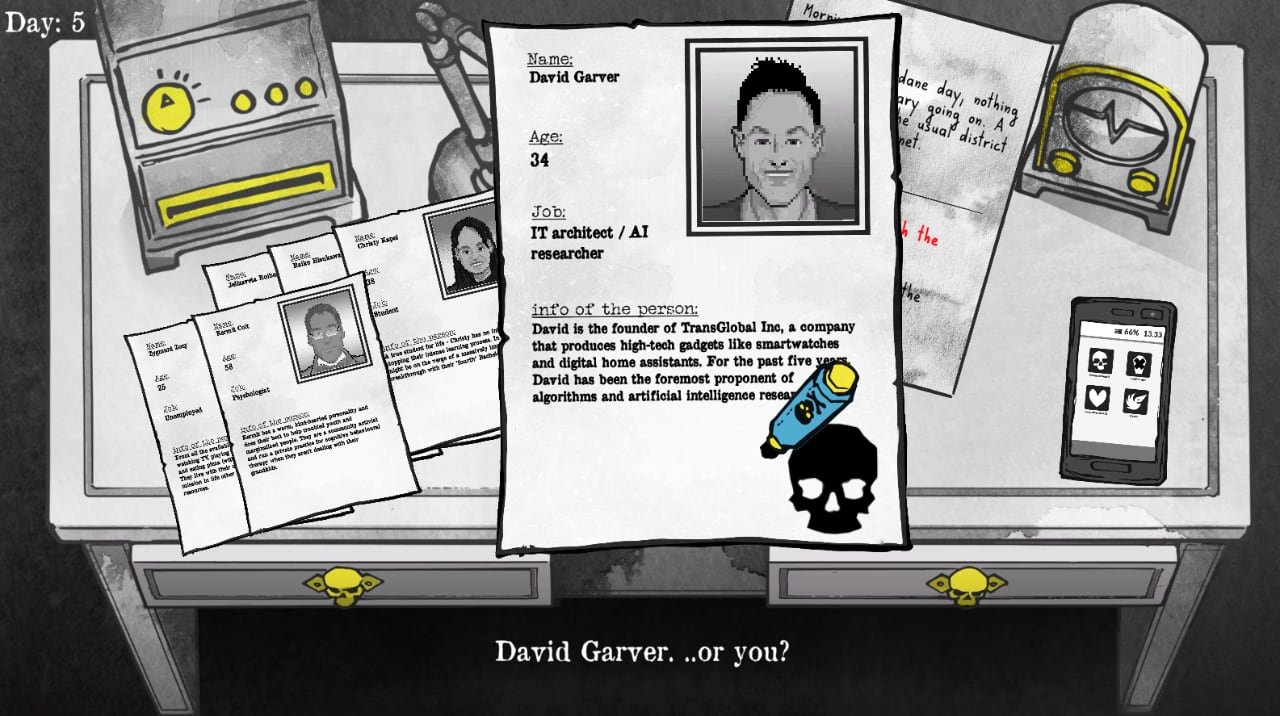 The introspectiveness is what makes this game interesting. It trades away some potential silliness, and instead, you face some philosophical conversations with your boss at the end of each day. There are some tough questions for you to think about, like if it’s even ethical for you to be making these choices at all. Some responses could be silly or flippant, but there’s a lot of meaty answers like “you’re the one that gives me the rules,” or “I’m not happy about the situation.”

And for that, Death and Taxes is an engaging game for all the questions it poses—who really should get the thumbs up or down compared against someone else. It’s a free demo available on itch.io.

Welcome to another worldwide crisis: too many animals. Shocking, I know.

In Tom Astle’s Animal Inspector, you’ve been hired to help solve this crisis by sifting through scores of animals to decide which animals survive another day. That’s not it, though. You’ve got skin in the game too: you have an adorable dog that you want to save from the culling. 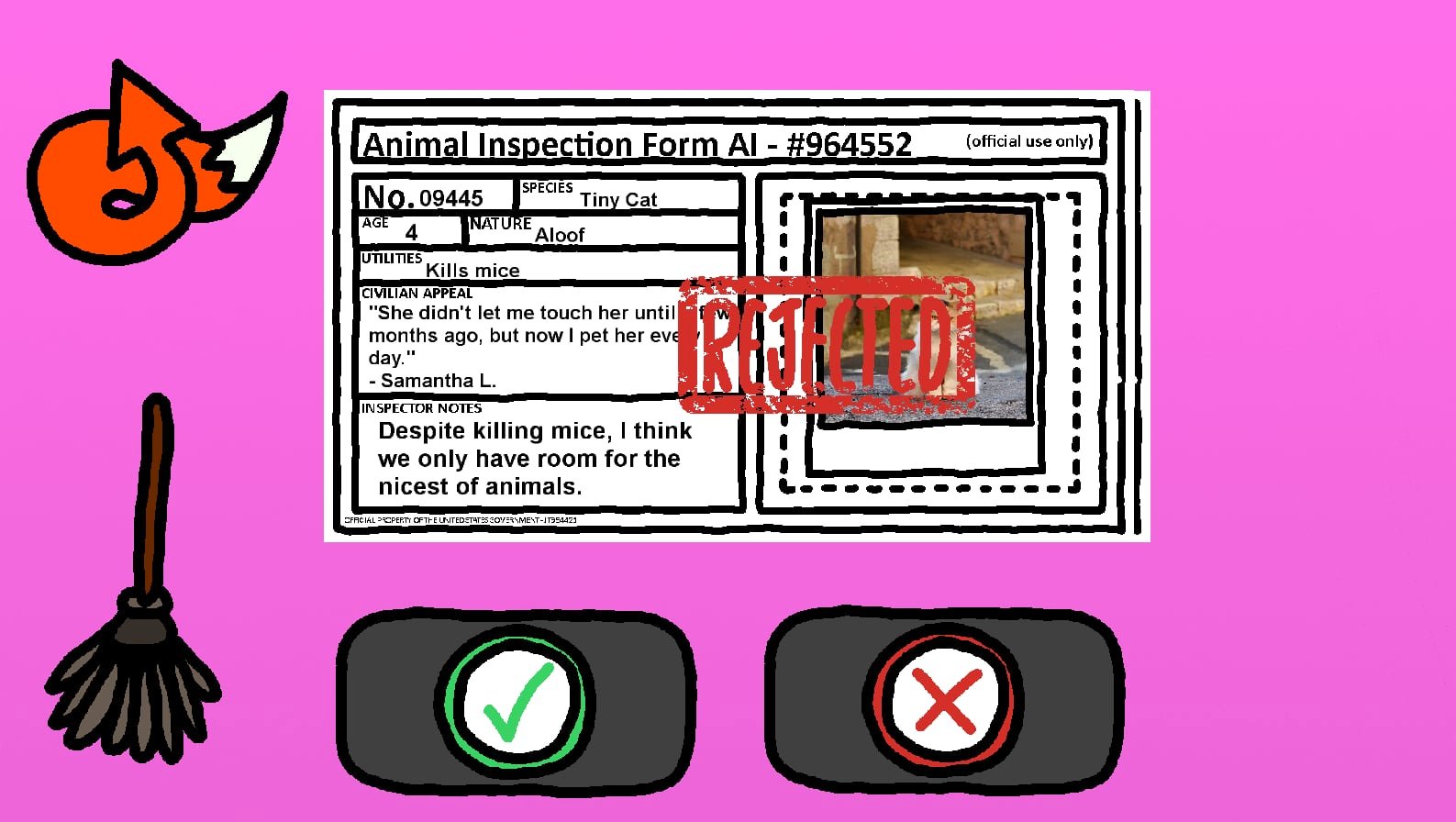 We Rate Dogs, the game?

Day by day, the game foists a new batch of animals upon you to approve or reject.

In the WeRateDogs era of the internet, a game like this is strangely cute—you just want to tell every lazy dog that, yes, they are the most adorable (13/10). But, don’t be distracted by your impulse to or the game’s cute and cushy MS Paint Aesthetic. It’s all a distraction from the fact that some animals won’t pass muster.

Each day (and a new stack of animals) throws something different at you to switch it up and inject unique flavor. There’s the day where Martha—a bonafide cat lady—begs for you not to reject any cats, and the game dumps on you a stack of five cats. Or the day a documentary crew arrives, and you have to be on your best behavior for them—yes, you can imagine exactly how that goes.

You also have to inject your own opinion into your evaluations. Not only is there a binary approve/reject, but you need to give a reason. And the game tracks your reasons, and scolds you if you’re not good enough. You can’t swear, you can’t be repetitive, you can’t stamp multiple times—you know, the rules and procedure any proper bureaucrat should know. 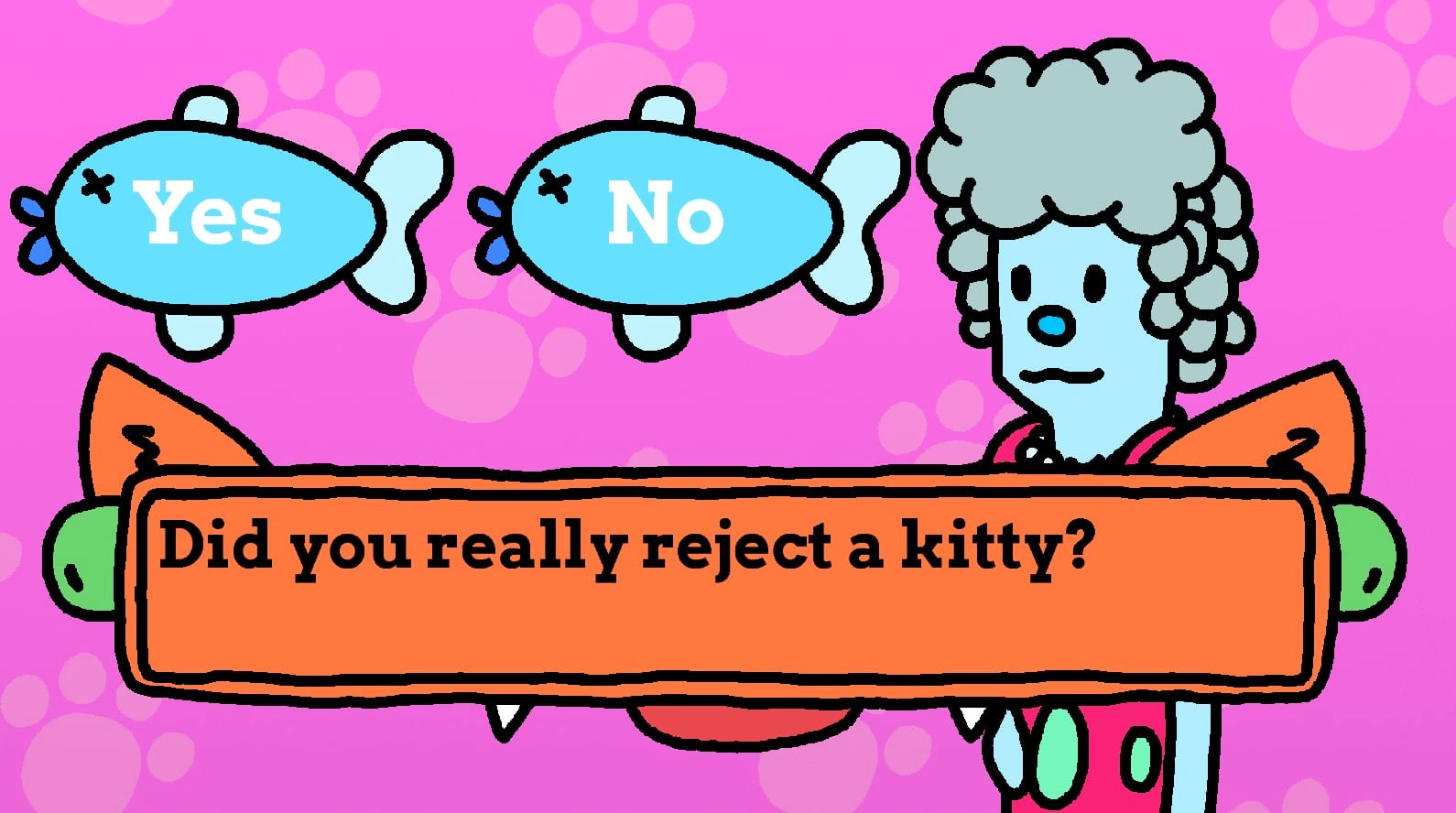 This game is a good jumping-off point for a developing genre of games that I find to be pretty compelling: Tinderlike games.

These tinderlike games feature repetitive player-initiated approval/rejection as a core mechanic. It could be several binary factors: yes/no, true/false, approve/reject, or a swipe right/left. There’s something about this type of mechanic—game or not—that answers to a primal thing going on in our brains. When Animal Inspector was first out, it was one of just a few of these “tinderlike” games, but now the genre is a bit more established. 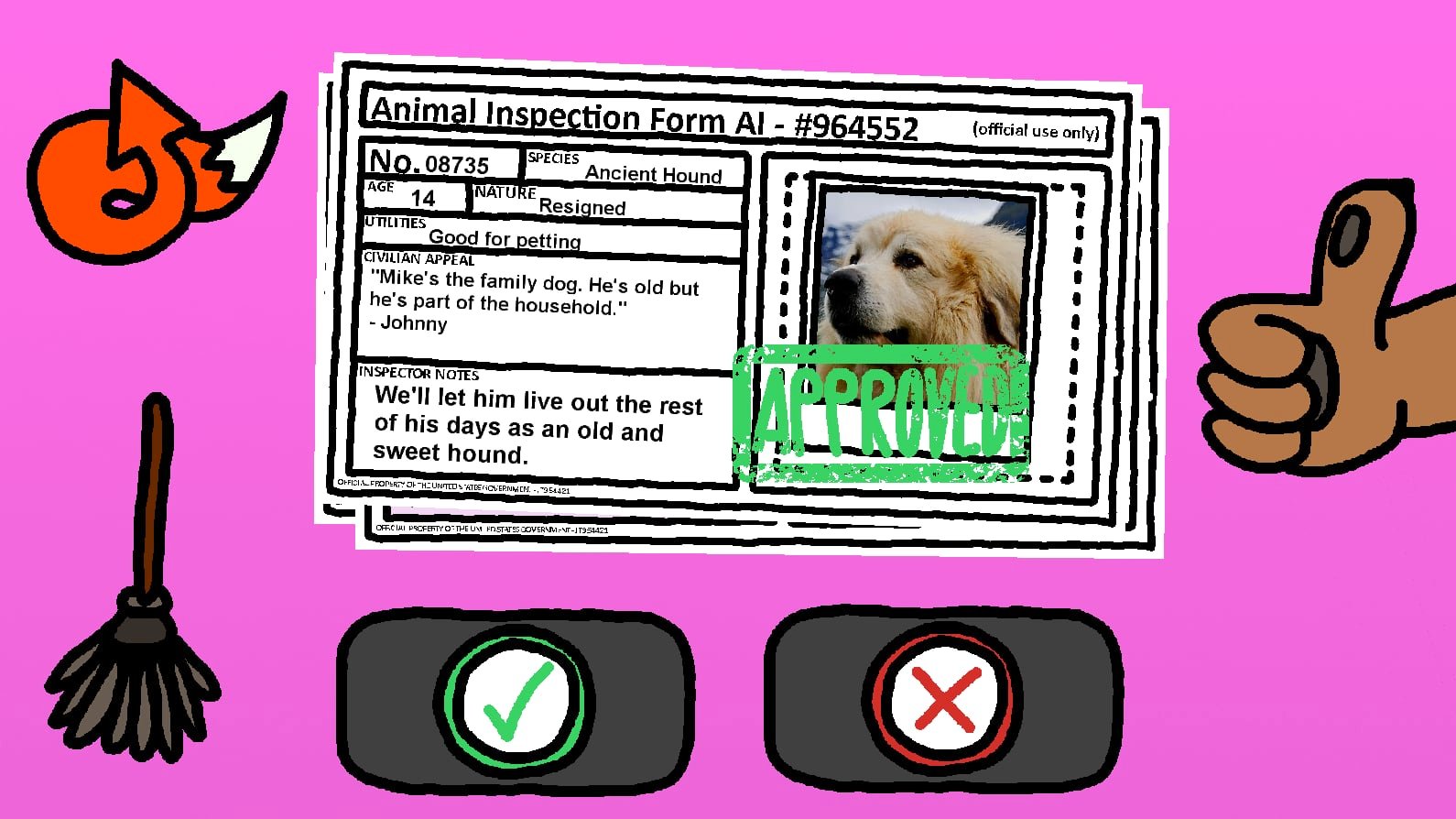 Well, wait, no, you can’t actually approve them all, sorry. (That’s also the point.) But, the game takes a quick thirty minutes, and you’ll hit an even faster failure route if you do try to approve them all.

Animal Inspector is a chill game that exists in a world of established Indies, with games like Sort the Court and Papers, Please as distant related cousins. It also features a soundtrack by Ben Esposito, notable now for Donut County.

You can approve and reject different pets in Animal Inspector for free on itch.io, for Mac and Windows.

If you could control a kingdom, would you be a benevolent ruler—one that feeds the people and pays for luxuries for your kingdom? Or, would you want to tax a circus, and sponsor a shifty character that steals from your citizens?

Sort the Court is a tinderlike simulation game by Graeme Borland, where you play the role of a king or queen, ruling over a cute and whimsical kingdom, deciding whether to approve or reject the whims of townspeople. But be careful, each decision has a cost—everything you do earns or loses you citizens, happiness, or coins.

Throughout your regime, you meet a delightful array of citizens seeking your assistance. Chester, a wooden chest, is hexed to eat humans repeatedly, and eventually seeks your help to have the hex removed. Miriam and her owl, Albert, are wanderers, and share some stories with you before going on their way. You’ll encounter Yarno, an advisor to the king of the Comfy Kingdom, followed immediately by Button Boy, who tells you that they’ re actually the real advisor to the king. You’ll also get drop-ins from Boots the cat, who always wants to be scratched. 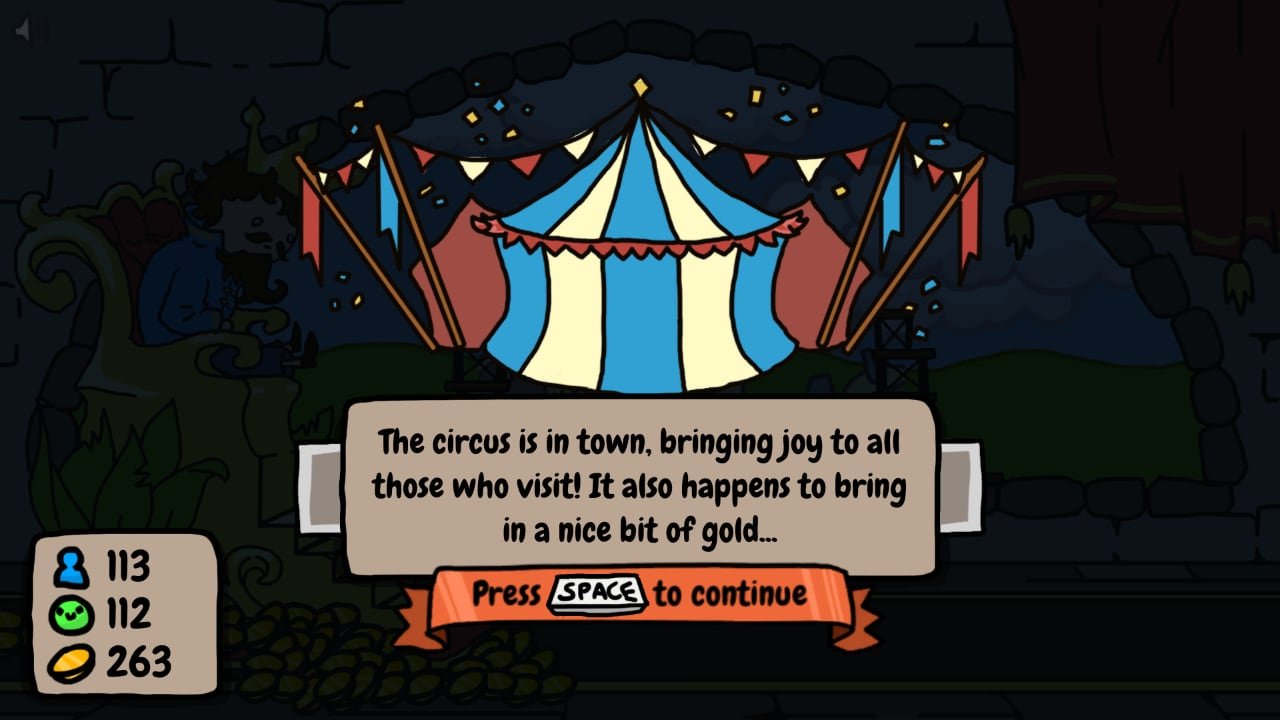 As your kingdom grows, you face new challenges. Following a dragon attack, you have to fund your blacksmith so they can smith a blade—the dragonslayer—to kill a dragon which has stolen from your kingdom. Later your decisions involve intermediating in quibbles between other nearby nations, like a conflict over marshland.

And, hey, I know how hard it can get for a modern ruler sometimes. In order to build a new, ornate town square—undoubtedly the best use of money—I did have to steal some coins from my citizens to make ends meet.

However, some of the game can get repetitive. I was nicknamed “The Creep King” by Lil’ Fang time and time again, while I was waiting for actual story progression decisions. But, there’s enough to the game that you’ll keep with it and pattern match; when you recognize someone frequently returning, you’ll just jab y or n, and send them on their merry way.

Amy Gerardy produced some excellent art for this game. The characters are delightfully realized, and the evolving backdrop as your kingdom grows is beautiful. The background music, by Bogdan Rybak, is chill and whimsical. It reminds me of the main menu music for Life is Strange—something uplifting that you can listen to on a loop for hours.

If you enjoy a “ruler simulation” game like Reigns (a game like Sort the Court, a close spiritual cousin perhaps), you’ll surely appreciate Sort the Court. It’s available in-browser, or for Windows, Mac, and Linux, on itch.io.