Roguelike games are a type of RPG, where players work through procedually generated levels, featuring permadeath and survival mechanics.

Card of Darkness is a card game by Zach Gage, Pendleton Ward (of Adventure Time fame), and Choice Provisions. Card of Darkness is like a game of solitaire mixed with distilled roguelike elements and a vibrant atmosphere. But don’t let this game’s sweet colorful aesthetic deceive you; this game is trying to wind you up. You’ll be seeing cards for days—they’ll even haunt your dreams.

Pick up a card

The game is relatively simple. Each game starts with a few cards face up. A card can be anything: a wide variety of monsters that will attack you, a chest that gives you gold, potions to heal yourself, various weapons to attack—you name it.

Here’s the catch, when you’re attacking with most weapons, you need to match your weapon’s even/odd parity with the monster card. So, if you have a sword with a value of four and the enemy has six, you’ll take two damage and keep your sword. But if you have that same four value sword against an enemy with five, you’ll be hit with one damage, and your sword will break. So this game isn’t always about picking up the heftiest sword—you might lose it with the very next card you have to pick up.

You progress through levels by picking up enough cards to reach the stairs or volcano at the top of the screen. If you pick up a card from a pile, you can’t leave that pile unfinished before advancing. You also need to keep careful watch of your health and try to forecast what will happen with the marked cards that you need to pick up before proceeding to another level.

Considering that Pendleton Ward, creator of Adventure Time, is behind the art of Card of Darkness, it’s exactly what you can expect—colorful and silly, yet with a marked sense of adventure. Each region you visit presents a different flavor of game design and art, like new monsters and weapons with varying mechanics with increasing complexity.

For example, Fearfoxes lose three value every time you pick up a monster, so you try to pick up others first. A Potion of Patience is a regular portion, but its value goes up by one each turn. Later, there are beefy fire swords, Burning Steel, which damage you by one each turn while equipped. Further still, you encounter Horrors; they’re monsters that do enough damage to leave you with one health. They’re pretty, well, horrible, until you realize that killing one horror can kill all the horrors on screen. 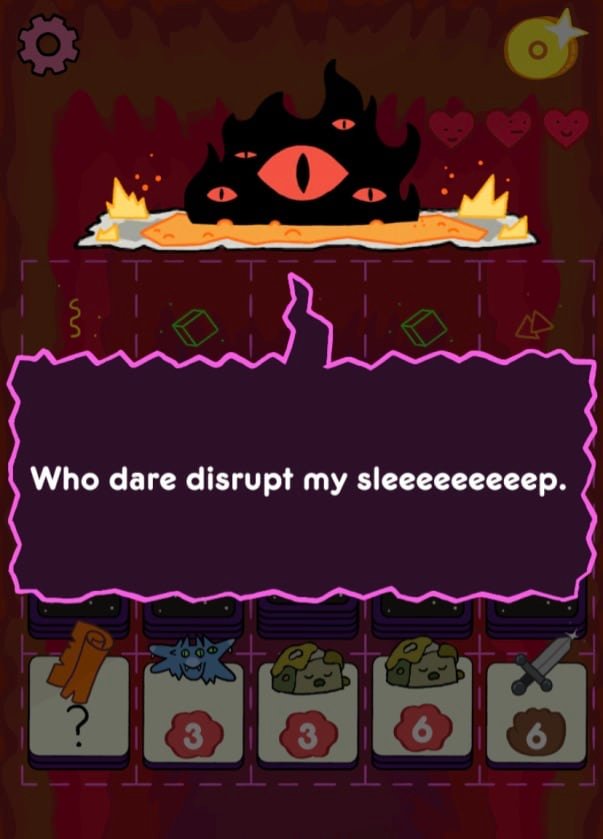 Card of Darkness is an RNG heavy game, and the randomness of the game is not your friend. That said, the randomness does bring balance and depth to this game. It softens the difficulty when you’re just starting, and also deemphasizes the need to min/max the game for advanced players. And in that sense, the game feels well-tuned. It usually feels like you can figure your way out of a tense scenario, but if you do fail, a restart of the level might be the run where you squeak through. I love how this feels—it gives you a euphoric feeling of “oh god, I just barely made it through with one health.”

The fun of this game is the problem solving to get ahead of the randomness. How do you tailor your Cards of Darkness for each level? It’s chasing the thrill of steamrolling a level because you found a buildout of Cards that’s a bit busted. (If you’re not changing your Cards of Darkness on most levels, you may be getting stuck for longer than you need—especially boss levels.)

Sure, the game is hard, but it’s not unfair. You might get the occasional level with brutal RNG where you give up immediately, but the game wants you to finish it. There’s no penalty for failure—if you have poor luck, it’s as fleeting as bad a hand of poker. And You’re coming out ahead every time—you’re bound to pick up some coins from each level, enable you to get more tokens or slots for Cards of Darkness that give you an extra advantage when you may be quite stuck.

Fall in the deep deep end

Card of Darkness is probably the best idle game on Apple Arcade so far. Like many other Zach Gage games, it’s a great game to pick up in idle moments, like waiting in line at a grocery store or trying to multitask while listening to a podcast.

I’ve played for several hours so far, and while I’d like to say I’ve finished the game, it looks like I still have a bit more to go—I’m presently battling my way though The Baxlan Delves as I write this (which is level six of eight). Based on my experience, I can say it’s a game just for “hardcore gamers”; it’s relatively accessible for anyone to pick up—with persistence, you’ll make it to the end of the game.

Card of Darkness is available for iOS and tvOS with an Apple Arcade subscription.

Dicey Dungeons is the latest title from Terry Cavanagh and his team, best known for the difficult games Super Hexagon and VVVVVV. It’s a hybrid dice rolling and roguelike game that is jam-packed full of charm.

You take control of dice that each embody different specialized tropes. Like a thief who can use steal powers of your enemies, or an inventor who incessantly invents new cards. It’s set in what feels like an adorable and friendly juxtaposition of 70s era game-show and children’s board book. Well, the “friendly” is only surface level—the host, Lady Luck, has you trapped, forcing you to play a rigged game forever. 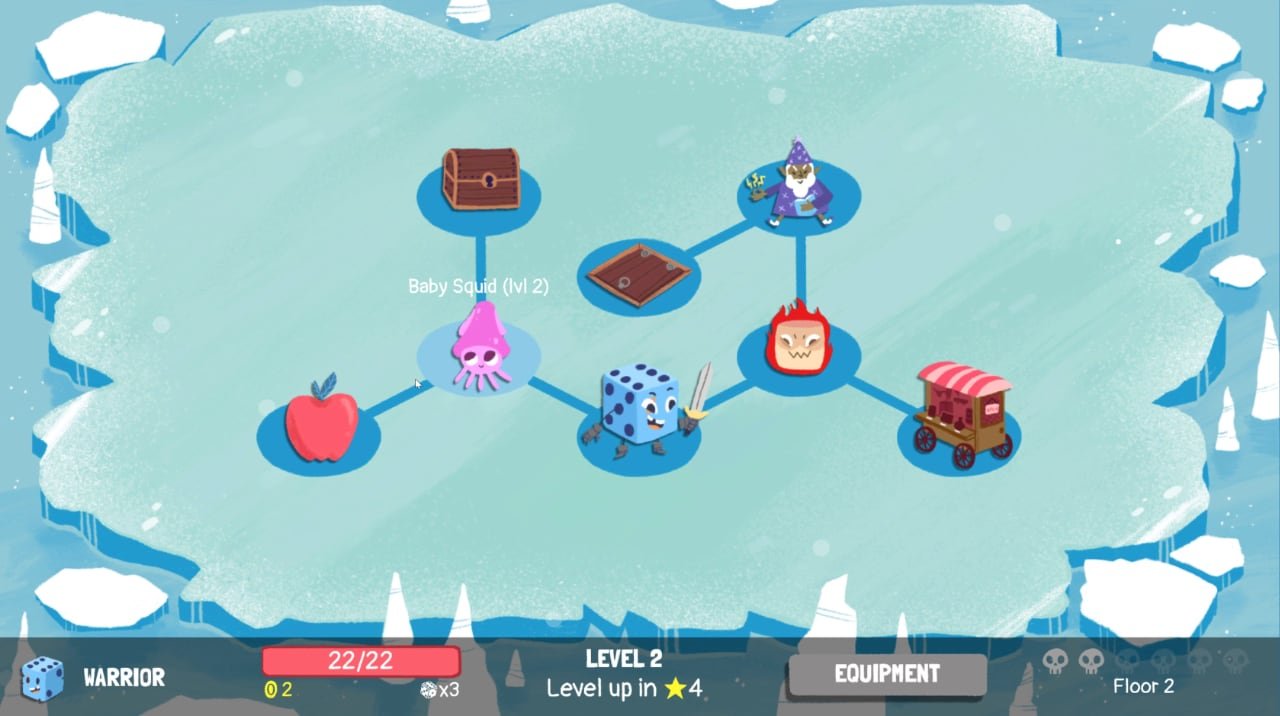 Your goal is to acquire cards, defeat enemies, and level up, as you battle your way to the final boss. In battles, you roll dice and drop them onto cards that have different effects, like your attacks, magical abilities, or other things to spice up the fight. You need to make judgment calls when deck building as you progress like, do you take a big fire attack or a small poison attack that stacks?

This is a game of patient trial and error, really. In each playthrough, you go down different routes with your builds, to get to the final boss. When I fail, failure actually feels good. It’s not pure RNG that determines your failure; that would make it unsatisfying. However, when I fail, I usually can tell where I’ve gone wrong with a build. Perhaps it’s overspecializing in poison, not bringing anything along to deal with limited health, or not having a card to deal with extra dice on the table.

I’ve previously said that I’m not much of a roguelike player, but Dicey Dungeons does a pretty good job of making me feel relaxed in the genre. Most critical decisions—visiting a shop, or picking up loot—are limited to simple “either/or” scenarios, like choosing between an ice or fire attack card. I’ve never encountered a giant screen of options that I need to choose just one thing from, which would cause frictive indecision that would ultimately make an anxious person like myself grow weary of the game.

This game has a lot of repeat playthrough potential too. There are six characters, with six episodes per character, and each one changes their base traits in what seems to be simple ways. The changes in each episode actually have a dramatic effect on how you approach that run with that dice friend.

According to Steam, I’m now 10 hours into Dicey Dungeons, and I’ve thoroughly enjoyed my time in it. Thus far I’ve had successful playthroughs of the first episode for all the dice friends, and have gotten through a few second episodes too. It’ll be a game I continually pick up and try to through casually. Dicey Dungeons is available on itch.io for Windows, macOS, and Linux, and includes a Steam key.

You awake in a dry desert. Your mind is shattered and your memories are broken. For a second, everything goes blank. Who are you? Where are you from? Even when you try your hardest to remember, only parts are able to be recalled, at least in your current state.

These are the opening lines of Realms of Requiem, a pixel art roguelike by SlickRamen. While I’m no roguelike expert, this opening prose convinced me to dive in.

In each new game, Realms of Requiem allows you the choice of three random characters so you can choose someone that fits your play style. For example, you can play as a magic-focused mage, or a warrior with a dominant primary attack. After you pick your character, you must learn your weapon and the right combination of base action, and primary traits, and secondary traits to survive the world. As is a tradition for a roguelike, the enemy difficulty increases level by level, requiring you save and upgrade your kit to survive more levels below.

My early attempts ended in failure, but I kept trying characters until I found one that fit me—a dwarf warrior equipped with a longsword. I had to figure out what items were most essential, and how to manipulate the enemies. In later levels, enemy difficulty and progression became a little flat for me as I understood the framework and wrapped my head around enemy behavior, but saving for better weapons was essential for the final level.

You may enjoy Realms of Requiem if you enjoy games like Binding of Isaac, but set in a fantasy setting. Realms of Requiem is available on itch for Windows. I played for about an hour, and my successful playthrough took about twenty minutes.