MOLEK-SYNTEZ is a puzzle game by Zachtronics, known for SpaceChem, SHENZHEN I/O, and TIS-100. It’s a cousin to Opus Magnum, but with chemistry instead of alchemy.

It’s 2092, and you’re a chemist living in a cold Romanian apartment. Your task is to program a molecular synthesizer—your MOLEK-SYNTEZ—by breaking and building bonds in ordinary industrial chemicals to synthesize new pharmacological molecules.

These walls don’t do a damn thing to keep the cold out.

You're filling the shoes of a 2090s era chemist who's fiddling around with hydrogen bonds. Brief glimpses of this chemist's life fill out cutscenes between puzzles. "The walls don't do a damn thing to keep the cold out", he thinks.

As with most Zachtronics games, the subject matter drives the rules and mechanics of the puzzles. Chemistry knowledge isn't essential here—the mechanics and rules are something you can pick up on the fly, and it's only as complicated as counting bonds between atoms.

It's a pretty textbook "Zachlike" game—you know what to expect if you've played Zachtronics games before. Completing and optimizing puzzles is the journey. This time, though, you’re bonding benzene and carbamide to make Asprin. Or methanol and hydrochloric acid to make chloroform.

In each puzzle, in order to build your target molecule, you program six emitters that add, remove, or shunt hydrogen atoms to and from your target, as well as various operating controls like shifting your emitters, moving or rotating your targets. You program these options on a timeline on the left side of the screen, manipulating and emitting until you finally output your target product. Initially, you’ll seek just to build the molecule altogether. But as you gain experience with reaching solutions, you can more actively devise methods to optimize your programs, like completing target molecules in the fewest number of operation cycles, or with the fewest number of modules or symbols. 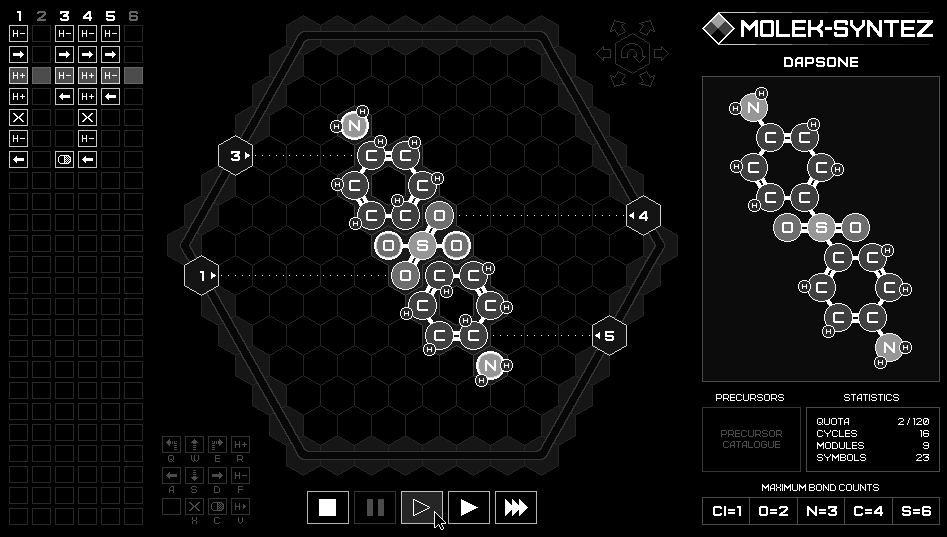 Build and optimize your programs

The real game the rewarding feedback loop from optimizing. Once you solve a puzzle you've been chewing on for a bit, MOLEK-SYNTEZ shows you a histogram of solutions, which serves the purpose of setting a newer, harder benchmark for you just a bit out of reach. It's an effective trick in getting you to dive back in and iterate further.

I’m captivated by the irresistible need to optimize my solutions in these games. There’s an unspoken gentleman’s agreement between my friends and me: we’re just going to continue to over-optimize and usurp each other’s leaderboard positions until we get bored of the game. (But we’re here to help each other if someone gets stuck or misses a trick). Naturally, there's also a subreddit where people have been sharing gifs of their solutions.

If you don't have many Steam friends who have picked up this game, you can turn on percentile measures as benchmarks for you to compete against. I try to target my solutions to be in the tenth percentile of whatever category I'm shooting for—the first percentile is too daunting, and I still like to progress onto later puzzles too.

Someone who believes the world is logical is bound for disappointment.

The minimal graphics shouldn’t distract you—even though it’s got cold computer-like looks like TIS-100, the difficulty and accessibility are quite similar to Opus Magnum.

As is tradition, it also includes a new variant of solitaire. It’s a vanilla solitaire variant, but rather than storing cards in the upper foundations, you “cheat” cards onto the top of any pile of your choice. If it sounds precarious, it is—it gets out of hand quickly.

The game’s soundtrack is a 90-minute atmospheric ambient experience, composed by Matthew Seji Burns, who is the composer and writer behind Zachtronics games, and also the director of their visual novel, Eliza. (Which too many people have sold short, and deserves another shout because it’s one of my favorites this year.)

They all resemble each other, don’t they?
One might get you high as fuck, the other will kill you.

I’ve completed just over half of MOLEK-SYNTEZ’s levels so far. This game may not have the flourish and polish of Opus Magnum or SHENZHEN I/O, but it’s cut from the same cloth—if you’ve enjoyed those, you’ll enjoy this one.

Even though this was a surprise drop with minimal fanfare from Zachtronics on a random Monday, it’s not one to miss. MOLEK-SYNTEZ is available on Steam in early access and will be available on other platforms after the early access period.

Ramen Rave, by Andy Bae, is just your average cooking platformer—if a “cooking platformer” were a standard game genre. Tasked with making ramen for your friend Jammy’s birthday, you must use your platforming and utensil skills to make a perfect bowl of ramen. Shoot away flies and undesirable ingredients while allowing only right ingredients in—such as eggs and flavor packets.

Matching the quick preparation time of instant ramen, Ramen Rave is a fast mini-game experience that is done in just 3 minutes. The pressure stacks up as time goes on—more and more ingredients fly by, requiring you even more quickly and accurately, lest earn a lower score. When the timer runs out, your score is tallied up and added to the leaderboard.

Ramen Rave is available on itch.io for windows.