Journey is an adventure game by thatgamecompany. It was initially released on PS3 in 2012 and released on PS4 in 2019. It’s out for PC now—and I got to experience it for the first time.

Journey is beautiful, mysterious, unexpected, gripping, and jaw-dropping. It’s so beautiful, it looks like you’re playing a painting. You start in a vast desert—the sand shimmers and cloth flows with a staggering level of realism. The soundtrack is killer, and tightly fits the mood and tempo of your game.

Honestly, I think this is a game best experienced in the dark, so if skimming these screenshots convince you, stop reading now and jump in if you’re at all interested. Go in with as little detail as possible. You won’t be disappointed. (I have tried to avoid as many spoilers as possible in this article, but I share more than I knew about the game when I first experienced it.) 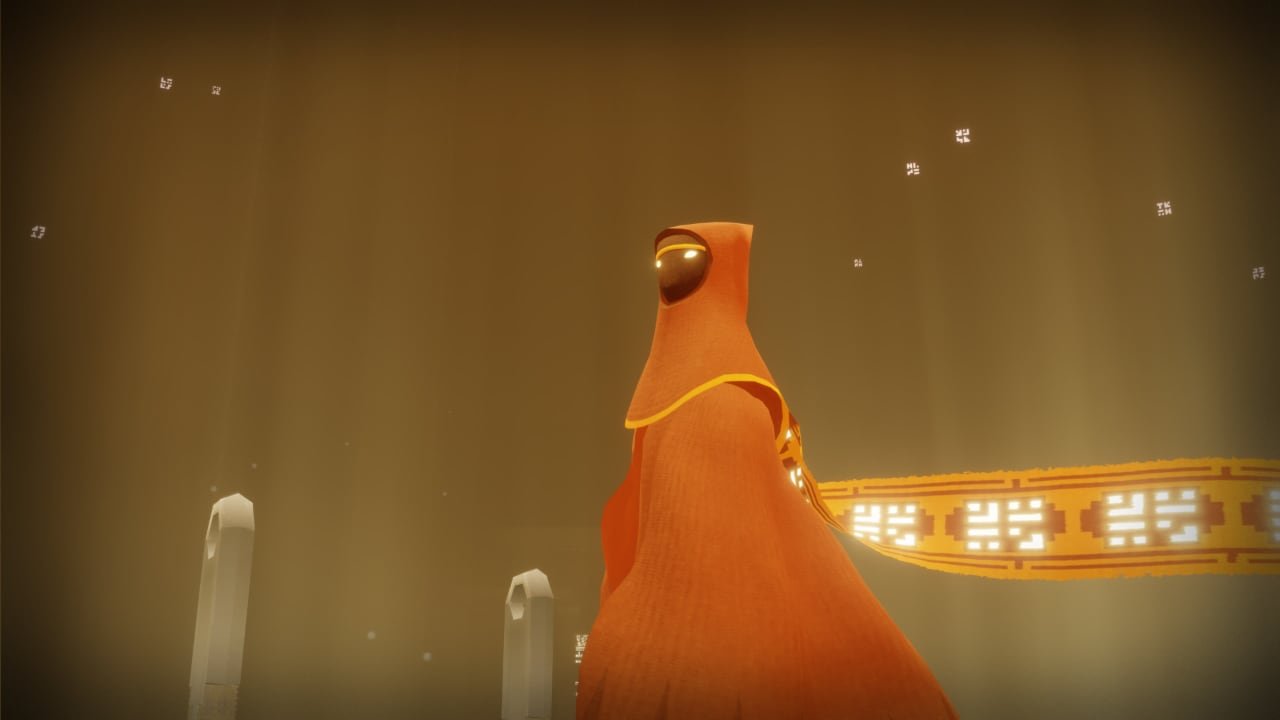 The figure in red

You take control of a nameless, faceless, red-robed figure in the desert. There’s no dialogue, checkpoint, or visual clue to tell you what to do—other than a tall dune with fluttering cloth off in the distance. So, you do that game thing™—move forward and walk.1

After cresting the hill, the game cinematically guides you to experience new story beats. You first find a glowing symbol that you pick up from a strange rock, which gives you a scarf. Then, you encounter torn cloth fragments—you can’t speak, so chirping at them energizes your scarf.

The ancient glyphs round it all out in this starting area—you don’t know who you are, and you don’t know your past. There are so many questions, but you just advance onward and make it up as you go. You’ll find more glowing symbols to grow your scarf, and you’ll find more glyphs which tell you about your story. 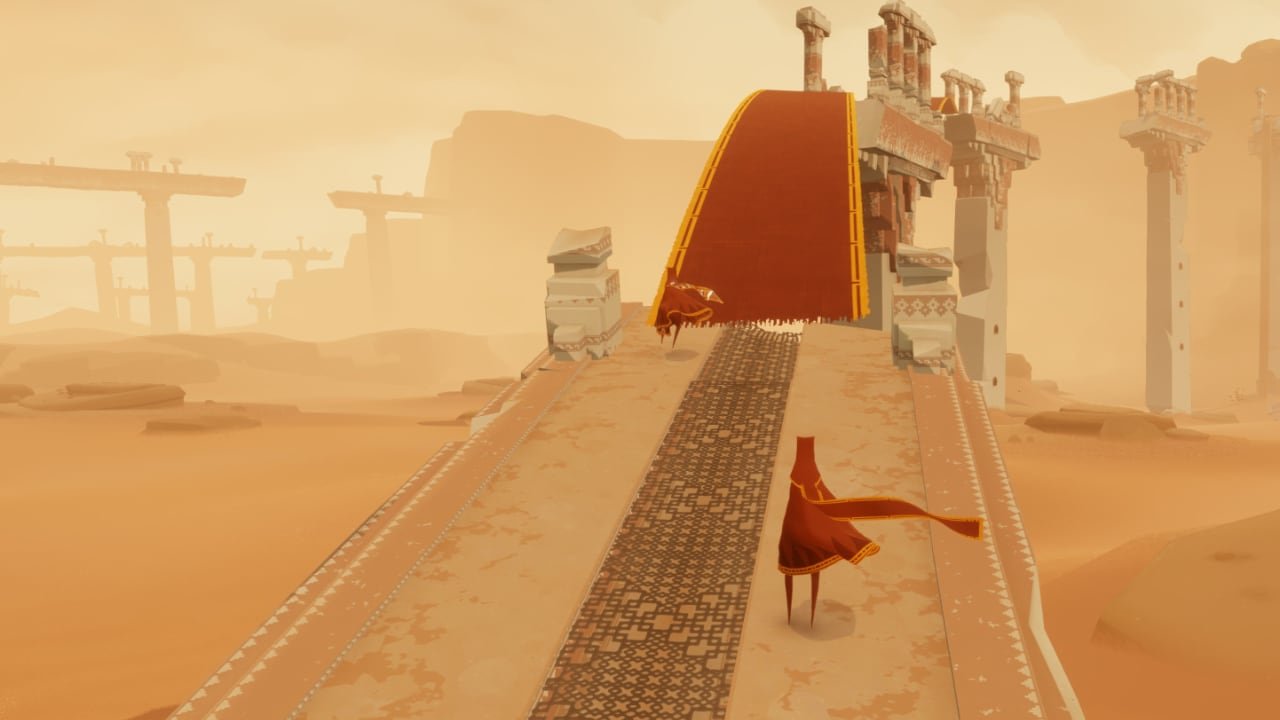 The second figure in red

In the second area, as you’re still discovering your role in the world as this red-robed desert wanderer, a new figure appears. It’s you, but not. It’s acting with agency, seemingly doing its own thing until it takes notice of you. It runs over, and chirps—you chirp back. This is new.

To be honest, I was taken aback when I first found the other desert wanderer—I am averse to multiplayer games, and I was worried that I would ruin this person’s experience because this was my first time playing Journey, or that they would somehow be a nuisance in my gameplay. It turns out, no—they’re there to advance the story with you. The only way you can communicate is by chirping and helping. You can refill their scarf by chirping loudly, and they can refill yours. Touching each other also refills both of your scarves. It’s endearing. 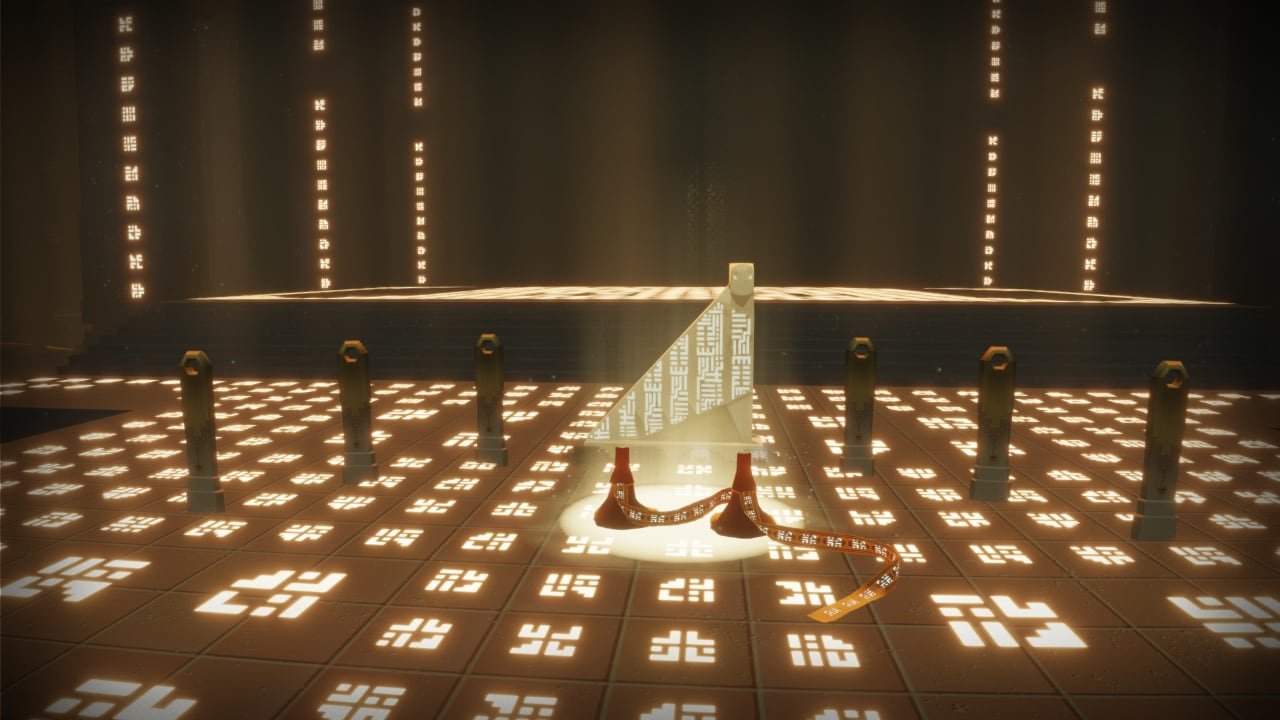 What we owe to each other

You don’t know anything about the other wanderers that join you in in your adventure. But a sort of social contract exists—you’re on this journey together, and that means helping your fellow wanderer through whatever it takes. I probably was all too slow for one of the first wanderers I encountered—I wanted to explore the vast desert. Another wanderer chirped insistently at me to help me find something I missed. I took that, and helped another companion later in the game find something they missed.

I kept wondering about who I was playing with—what are they thinking about, why are they here, how much did they know about the game. And then I’m also reminded about how much that doesn’t matter, because right now I’m experiencing the story with this red robed, anonymous figure.

All this without chat, without language, and without knowing who you’re with. It’s not about you, your politics, your language, or your country.

It’s about the journey along the way. 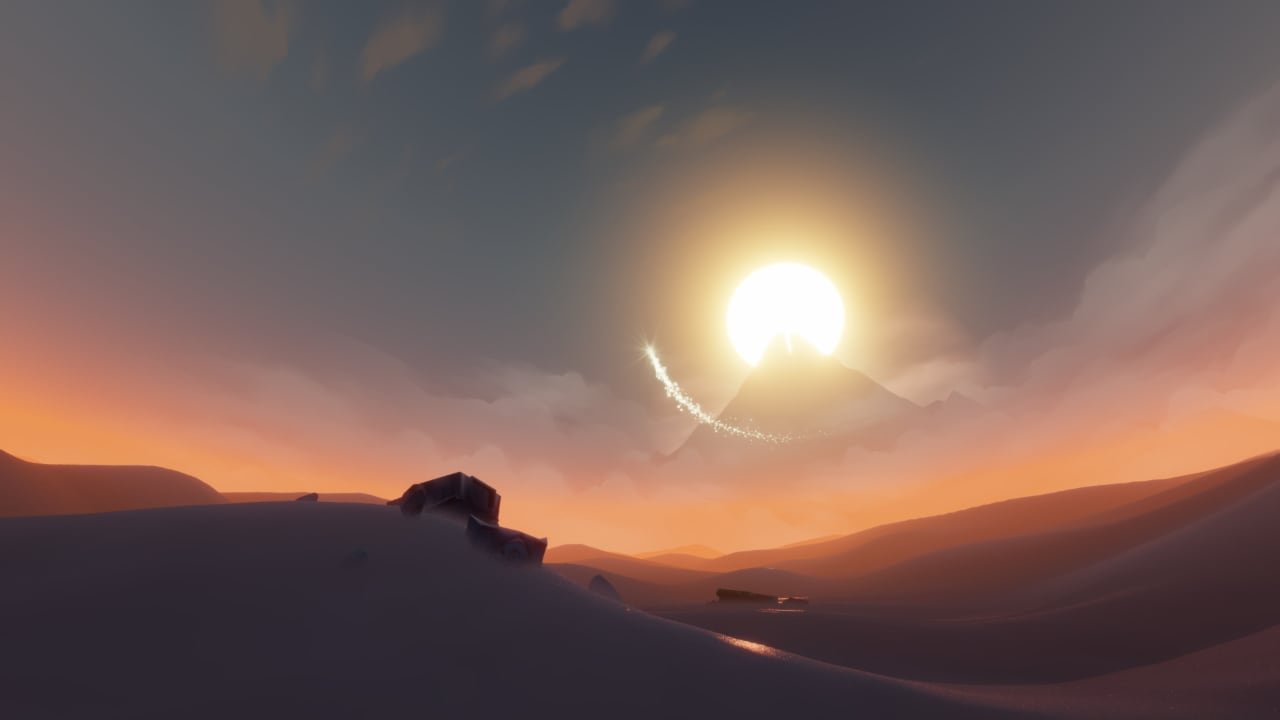 Journey is out now for PC on the Epic Games store and is also available for PS3 and PS4. I played through journey twice2—each time taking about 2 hours— and had the soundtrack on repeat for days afterward. Go play it. Seriously.

Sealed Bite is a forest platformer game by securas and wondard, which took first place in the 2019 GitHub Game Off. You play as a little red riding hood character who is venturing around the forest. During some light platforming, you're suddenly attacked and bitten by a werewolf, and black out. What sort of trouble can you get into in the forest? Recovering from the wolf bite, you meet a spirit who tells you what’s happened and gives you the...

Atma is an adventure game made by teamatma. You play as Shaya, a guardian who keeps a balance between the spirits and the material world. Your lover and fellow guardian, Atma, tries to create an urja—or go through the process to become an elder—prematurely. This creates a rift, allowing spirits to wreak havoc in the material world. Your goal is to seek Atma’s key of memories. Your primary way of interacting with the world is by a sort of spel...