You’re approaching a lodge in the wilderness. As you near, you see the flash of two gunshots, followed by sharp drum beats and a jump cut to black.

These are the first moments of Once Upon a Crime in the West, a narrative murder mystery game, by developer National Insecurities, exclusively available in the Humble Monthly Trove.

On the twelfth day of Christmas

As you enter the cabin, you encounter an array of highly-stylized corpses strewn about and find the bartender impaled with a knife in his eye, beckoning you in. It’s the twelfth day of Christmas, and it’s a good one—“except for all of these dead folk,” the bartender quips. The bartender instructs you to use a magical camera—conveniently left on a nearby table—to step back and relive scenes from the previous eleven days, to figure out just what happened here. 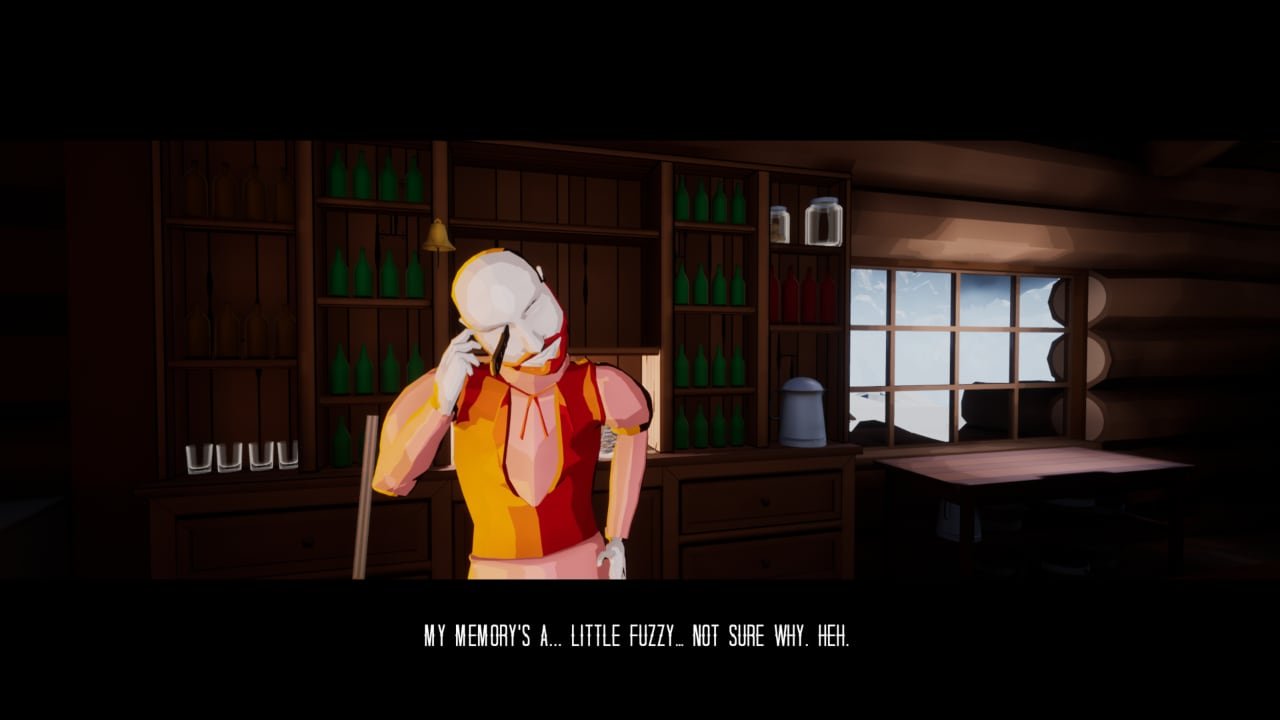 You should already be able to tell this isn’t a game that takes itself too seriously. The game is rife with black comedy, witty writing, and silly on-screen gags. Scene changes are accentuated with sharp drum beats and quick cuts. The bartender, Elijah, throws a coin in the swear jar every time he swears—a gag which does not get old. Even the people staying with you at the lodge are hardly fazed by an on-screen death during a poker game—instead joking about it after a moment of reaction.

It’s familiar, but not too familiar

Sure, this game bears substantial mechanical similarities to Lucas Pope’s Return of the Obra Dinn, but that doesn’t detract from it. The colorful and stylized low-poly character graphics are a sharp departure from Pope’s title, and this game has an entirely different spirit and gravity to such a similar situation.

In a way, it’s also a step up in difficulty from Return of the Obra Dinn. After you finish watching the events of the prior eleven days of Christmas, you’re left to deduce what happened by linking polaroid pictures of characters together. The game doesn’t hand hold you during this point—you need to rely on your notes and memory of the dialogue to make these connections. Perhaps the game should allow you to rewatch previous scenes, but this also feels like an extra challenge, one that’s extra rewarding once you’ve made all of your logical conclusions. (If you get stuck, I do have a screenshot of the solution—I can quietly provide it so you can finish out the game. Keep your game open, there’s no saving.)

You can play the scenes in any order, but it seems best to start from the First Day of Christmas. Also, I did encounter some oddities when just starting the game, after placing the camera and scrolling to switch days—the game wouldn’t respond to my scroll wheel. If this happens, you may be standing too close to the camera, somehow. I was able to get it to work if I stepped back.

Once Upon a Crime In the West is available for Windows, exclusively in the Humble Monthly Trove. My playtime was about two hours. It’s worth a shot if you enjoyed Return of the Obra Dinn, or are just up for a comedic murder mystery.

A Short Hike is a casual exploration adventure game from adamgyru. I know am by no means the first to be to make this analogy, but A Short Hike is pretty much a one-take Animal Crossing, with a well-woven yet gracefully casual narrative. You’re Claire, a bird that’s stuck on a trip, desperate for cell reception. Distressed by not being able to get an urgent call, your Aunt May tells you that you may be able to get cell reception at the top of ...

A Hero and a Garden

A Hero and a Garden is a visual novel/clicker hybrid game by npckc. You play as a hero, locked in a garden by a witch, in the aftermath of destroying a town while trying (and failing) failing to rescue your princess. You’re tasked by the town doctor to start planting berries to sell to the townspeople. A lesson in empathy and forgiveness. As with anyone, you’re not exactly happy to be locked up in this unfamiliar town. This new gardening you’r...

Flux Caves is a puzzle game by Fubenalvo, inspired by The Witness and shrines in The Legend of Zelda: Breath of the Wild. Flux Caves is about solving puzzles, to push pipe blocks around to connect them to allow balls to flow from the start to the end of the puzzle unimpeded. In Flux Caves, you’re solving puzzles in two distinct environments. Some puzzles take place in caves, placing you in a “classic” puzzle chamber environment. Outdoor envir...