Set in a world of synthetic life, a group of synths, made in the image of humanity, seeks to make unauthorized modifications to themselves—by adding a serial port, to be able to communicate via networks rather than by human means. You play as a CETUS agent, tasked to investigate this group, learn about them, and find their leader, Andromeda.

This is what you’ll find in Subserial Network, a cerebral visual novel, by Aether Interactive.

Mechanically, Subserial Network plays out like a multi-window desktop simulator, similar to the interactivity you’d find in Sam Barlow’s Her Story—but this takes place on your very own desktop, rather than its own fullscreen window.

For the most part, you’re browsing the mesh network, bouncing from page to page, searching for context clues that hint you toward new keywords on the mesh net. As you’re finding new pages, you’ll also discover the email addresses of various synths online. Some will be happy to chat, others will realize who you are, and will be uncomfortable speaking. Certain conversations are two-way—you have the option to pick your replies to emails which change how the characters reply to you. You’ll also pop into IRC-style chat rooms—which the game doesn’t make enough use of—and see several synths interact with each other in real time.

Sitting on the Outside

But really, this is a game about more than all that. You’re an outsider looking in, observing a group of synths fighting for and figuring out a new identity for themselves. This is, after all, a story about change, and the game doesn’t shy away from analogs you’ll see in the trans community. Synths are learning by doing, and relying on the stories of others to get the energy and inspiration forward. You’ll find synths who’ll tell you your name, and then tell you they don’t care about their name—that’s just what they’re called. You’ll find stories of loss and growth. (Delightfully, you’ll also encounter a group of synths just excited about their favorite TV Show. and write fanfics about it.)

In all that, this game successfully captures a feeling of an internet we don’t know today. It reminds me of my days as a kid, bouncing around America Online—not really knowing what I’m looking for, but hunting for something interesting to consume my time. It also reminds me of the early days as a member of Reddit and Twitter communities. The days where everyone proximally knows each other, and you felt like you could strike up a conversation with anyone; before everything grew too large, and sadly, too anonymous and angry. 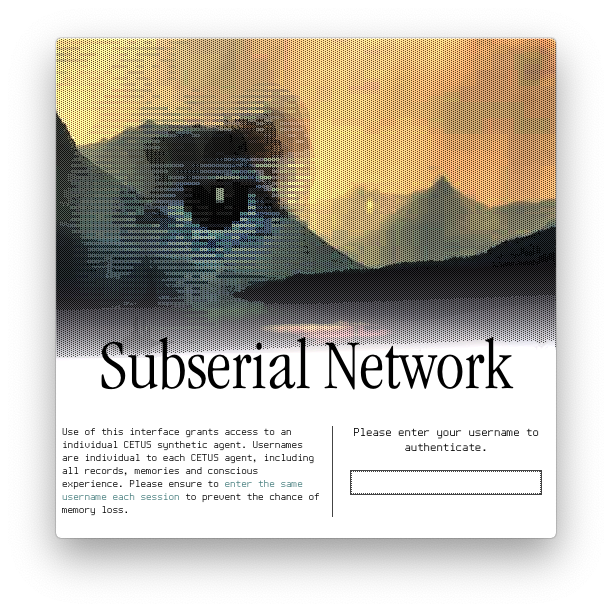 The game makes excellent use of its retro cyberpunk aesthetic. The classic 90’s style UI is just so lickable. I mean, the title card for the game is typeset in Baskerville—it feels like you’re launching 90s-era Photoshop 2.0 in Classic Mac OS. It totally nails it.

If you’re a fan of Her Story or are looking for a cerebral visual novel which forces you to hunt for clues, Subserial Network is likely a game for you. Subserial Network saves your progress, and my total playthrough took approximately two hours. It is available for Windows, macOS, and Linux, free as part of the Humble Monthly Trove, or standalone on itch.io for $9.99.

You know the saying: “Nothing is more certain than Death and Taxes,” right? Well, in Death and Taxes, you play as the Grim Reaper, assigned the job as the arbiter of death for humans in peril. It’s up to you to choose if they live or die. It's a boring office job, with perilous consequences Fate, your boss and keeper of world order, assigns you a new batch of humans each day from your assigned region of Cosmopolis City in Sun County. Your in...

Welcome to another worldwide crisis: too many animals. Shocking, I know. In Tom Astle’s Animal Inspector, you’ve been hired to help solve this crisis by sifting through scores of animals to decide which animals survive another day. That’s not it, though. You’ve got skin in the game too: you have an adorable dog that you want to save from the culling. We Rate Dogs, the game? Day by day, the game foists a new batch of animals upon you to appr...

Moment to Midnight is a pixel art interactive fiction game by taxiderby, daisyowl, and cherof, created for Ludum Dare 45. You start as a lost stranger, woken from the dark by a strange lizard. Stuck without any controls, the lizard gifts you abilities to let you listen and advance. Moving along, you start your journey of meeting and interacting with villagers of this sleepy little city. A sudden prophecy It turns out that all the clocks in t...